What Could My Feed Be Telling Me?

Anyone familiar with Equilibrium will have probably seen plenty of our testimonial ‘Before and After’ photos. In fact, this method of product promotion has been so successful that it is a strategy adopted by many of the other industry players.

A ‘Before and After’ is a simple promotional strategy; the message to potential purchasers is that something wasn’t right in the pictured horse’s feed. So, for example, by adding Equilibrium, a missing nutritional element was added, or an imbalance was corrected. The result being an improved coat, hooves and so on.

An example of a Before and After that Alice sent us. Her horse ‘Em’ was being fed a very simple diet where she saw fantastic results after adding Equilibrium to Em’s feed.

A potential problem with this form of promotion is that it can give some owners the idea that fixing certain problems is as simple as adding a magic ingredient to their horse’s feed. To compound the issue, if owners start adding multiple magic ingredients it quickly becomes expensive, time consuming, stressful and most importantly, nearly impossible to tell if a particular product is working effectively.

The founder of this company and inventor of the Equilibrium formulations, Dr Lex Wills BVSc. MACVSc., was someone who had a real love for the equestrian community. After developing Equilibrium, he knew he had something very special, but was also very aware of his responsibility to not promote it at as a cure all. He felt very strongly that Equilibrium should be promoted alongside responsible horsemanship practices as that is what is really in the best interests of horses and their owners.

When I look at the area of nutrition in the equestrian industry today, I’m not surprised to see so many confused horse owners. It’s a wonder that not more people are confused with literally hundreds of products all vying for attention and sales. This is not something unique to just our industry, the same problems exist in nearly every nutritional field be it human, dog or cat.

Where am I going with this? What does this have to do with what my feed can tell me?

Biotin is a B group vitamin marketed to horse owners that may help to improve hoof and coat quality. Biotin and its associated benefits were identified nearly 80 years ago in 1940. Before that, researchers had identified toxic symptoms in dogs, cats, rabbits and humans associated with a diet high in raw egg whites. The toxic symptoms were the result of the protein, avidin, in the white of egg binding with biotin resulting in it becoming unabsorbable – put simply, Biotin deficiency.

Now, if we adopted commonly espoused wisdom regarding Biotin promoted in the equestrian industry, the answer to this problem would lie in simply adding more Biotin to our diets – problem solved right? What about the other answer which is, don’t consume uncooked egg whites? Well that advice doesn’t line the pockets of supplement manufacturers.

Horses and Biotin require a similar approach, though I doubt Biotin deficiency is being brought on by the addition of uncooked egg whites in horse feed! Long proven research has led us to an understanding that Biotin is made by microbes in the gut which the horse can then absorb. Biotin is also present in many natural feedstuffs as well.

If horses can make their own Biotin and even receive extra amounts in the feed they consume, why is it possible to see improved hooves and coats after adding Biotin?

Healthy microbial populations are the ones that can synthesise enough Biotin to satisfy a horse’s nutritional requirements, unhealthy ones can’t. Adding Biotin to feed is merely making up for something that should already be there. Unhealthy microbial populations are nearly always the result of improper feeding practices leading to gastric ill health. Other symptoms of gastric ill health are things like ULCERS!

It is then possible that if an owner sees an improvement after adding Biotin to their horse’s diet, that its tempting to become convinced they need supplementation. Hooves fixed, coat looks better, problem solved right? Well maybe, but wouldn’t it be better for the horse if they received their Biotin the way that nature intended, by natural processes? Wouldn’t it be better for horses if we fed them in such a way that promoted natural health? This is our philosophy and the reason why we resist adding Biotin to our range of formulations.

Owners may like to adopt an approach like the one below to help them get to the heart of a potential issue: 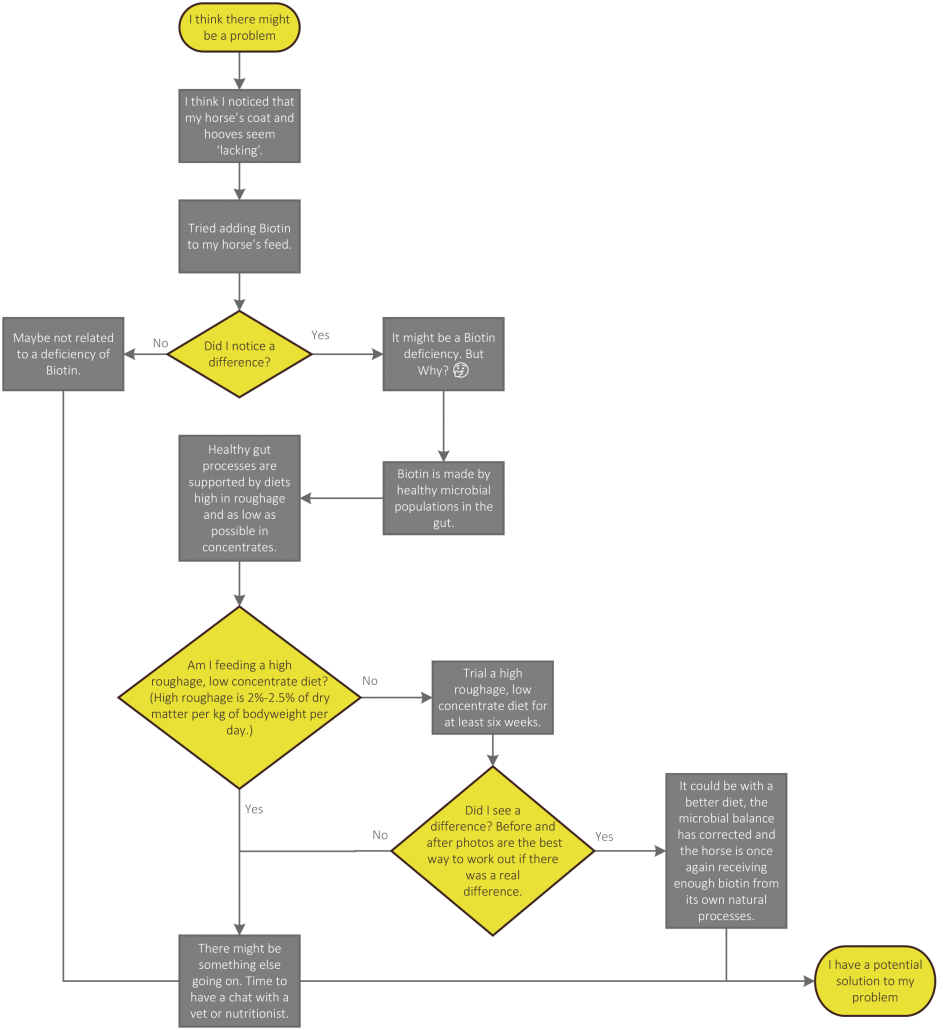 An example of a decision process that might be helpful to determine whether Biotin supplementation is necessary.

There are of course exceptions to the rule which is why the above decision process should be used as a guide. If an owner discovers that a particular feed or ingredient or medication is necessary, we would encourage them to step back and ask why? Is it maintenance? Or is it a treatment?

Lex’s vision for horses and their owners was one of keeping things as simple as possible, in terms of feeding and nutrition this means feeding only what is necessary. Over the years, we have been contacted by many excited owners whose amazing looking horses thrive on feeding programs that are deceptively simple and cost effective. Put simply, a horse that looks a million dollars doesn’t need to cost a million dollars to feed and maintain.

Equilibrium, made for horses, loved by riders.

This site uses cookies. By continuing to browse the site, you are agreeing to our use of cookies.

We may request cookies to be set on your device. We use cookies to let us know when you visit our websites, how you interact with us, to enrich your user experience, and to customize your relationship with our website.

Click on the different category headings to find out more. You can also change some of your preferences. Note that blocking some types of cookies may impact your experience on our websites and the services we are able to offer.

These cookies are strictly necessary to provide you with services available through our website and to use some of its features.

Because these cookies are strictly necessary to deliver the website, you cannot refuse them without impacting how our site functions. You can block or delete them by changing your browser settings and force blocking all cookies on this website.

These cookies collect information that is used either in aggregate form to help us understand how our website is being used or how effective our marketing campaigns are, or to help us customize our website and application for you in order to enhance your experience.

If you do not want that we track your visist to our site you can disable tracking in your browser here:

We also use different external services like Google Webfonts, Google Maps and external Video providers. Since these providers may collect personal data like your IP address we allow you to block them here. Please be aware that this might heavily reduce the functionality and appearance of our site. Changes will take effect once you reload the page.